Livet.exe is a “slice of life” game made in Unreal Engine 4 where you play as an average Joe going through his daily life.

The game is about establishing a connection with the main character of the game. This was done by making the UI act as sort of inner voice to the character. The point of doing this is to tell that the inner voice (that we all share), sure tells you important things. But it is not always right.

The Game starts in the characters bedroom, it’s quite dark and you can see a sunrise outside the window. As the sun rises the iconic green A-button will pop-up on screen. Instinctively, the player will press it, but nothing happens. The button will give visual feedback to ensure the player that the feedback is received, but nothing else will happen. After a few seconds however, when the player has realized that nothing happens and checks if he/she has missed something. The alarm clock will start to beep violently and the protagonist flies out of bed and down on the floor. The basically pointless A-button is there to make the player invested and thinking what he/she is doing wrong, and as he/she wonders what to do next, the alarm clock will beep and the player will hopefully be as surprised and caught off guard as much the protagonist (see images 1-3 for a visual demonstration). 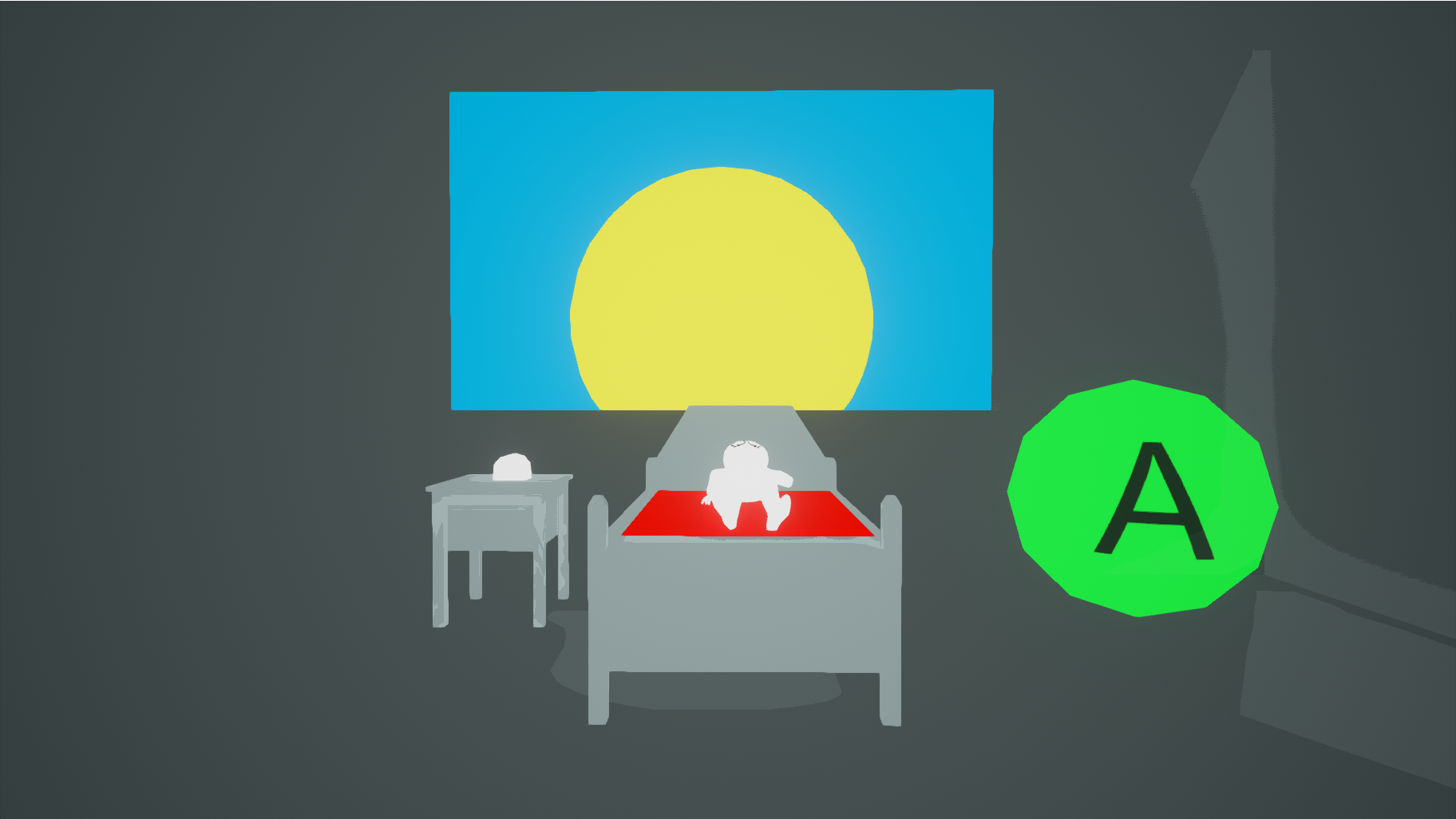 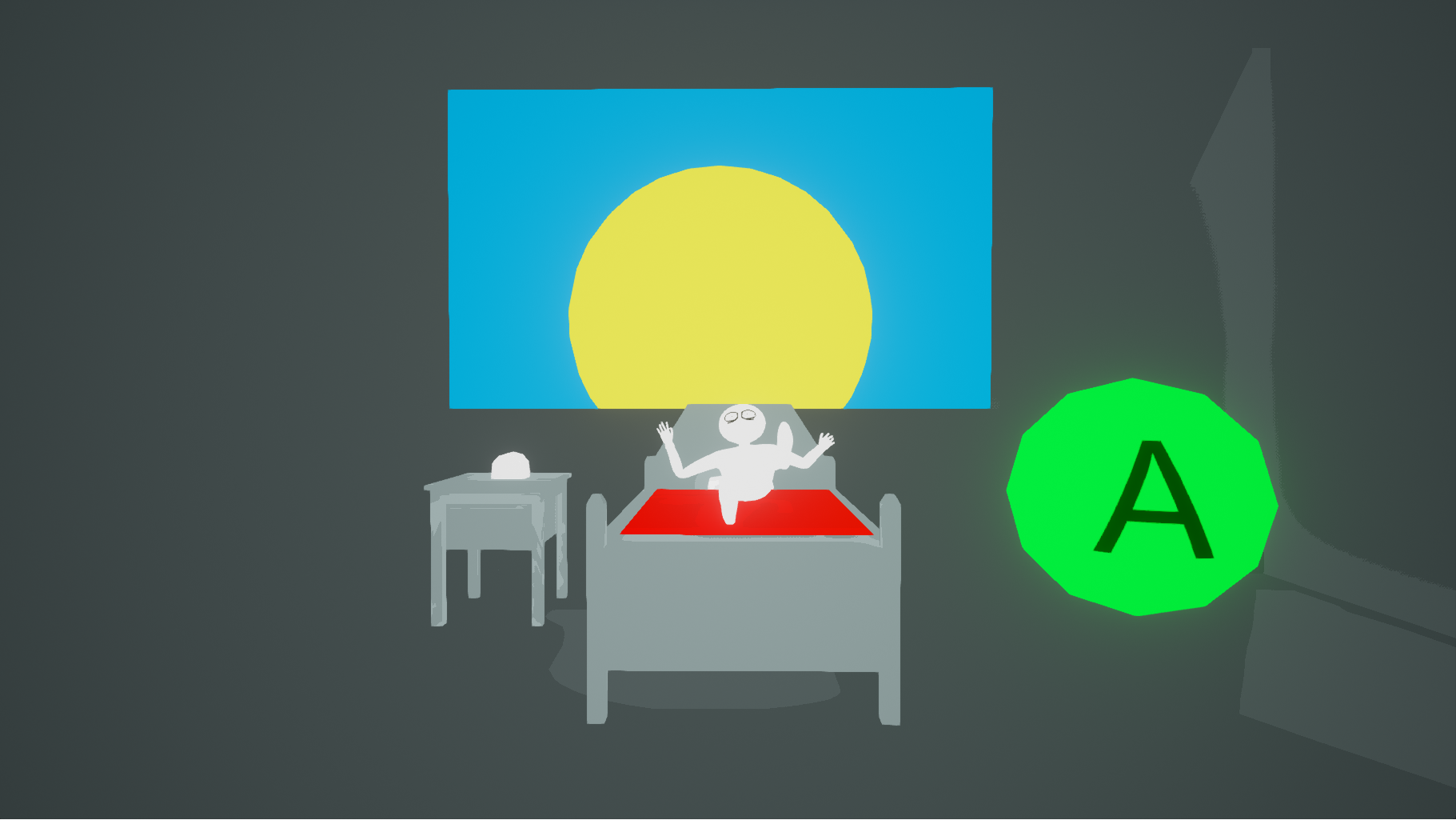 After that rude awakening the player will be thrown in the protagonist’s kitchen. Where a timer will be presented and steadily ticks down, with the text “Work begins in”. There the player will be presented with a yellow arrow, which will be a constant factor during the game. Objectives pop-up in the top left screen with the objectives “Get your coffee” and “Get your briefcase”. When the player exits the house, the arrow will point him/her towards the car, a cutscene will trigger when the player interacts with the car. The cutscene is made in sequencer and will portray the character trying to get his keys. But his clumsy hands betray him, and he drops his coffee, briefcase and keys (and also, the keys falls in to a nearby drainage) Great start of the day! Then the camera will aim towards his bicycle and trigger the song “The Joke That Is Me” by Silver Town. Then the camera will pan towards the clear blue sky where the aptly named title “LIVET.exe” (livet = life in Swedish) is shown, and the chorus of the song will play “Cut this cancer from my soul!” in a very catchy and positive manner.

The gameplay will then shift, and you are now playing as the protagonist bicycling along the highway with your trusty yellow arrow blinking you towards where you need to go as you have to mash the Right and Left trigger to keep up the momentum (which has been timed to be in sync with the song playing) as the “Work begins in” timer continues to tick down. This part is not so complex and it is aimed give the player time to take in what just happened and get a grasp on the “feel” and setting of the game. 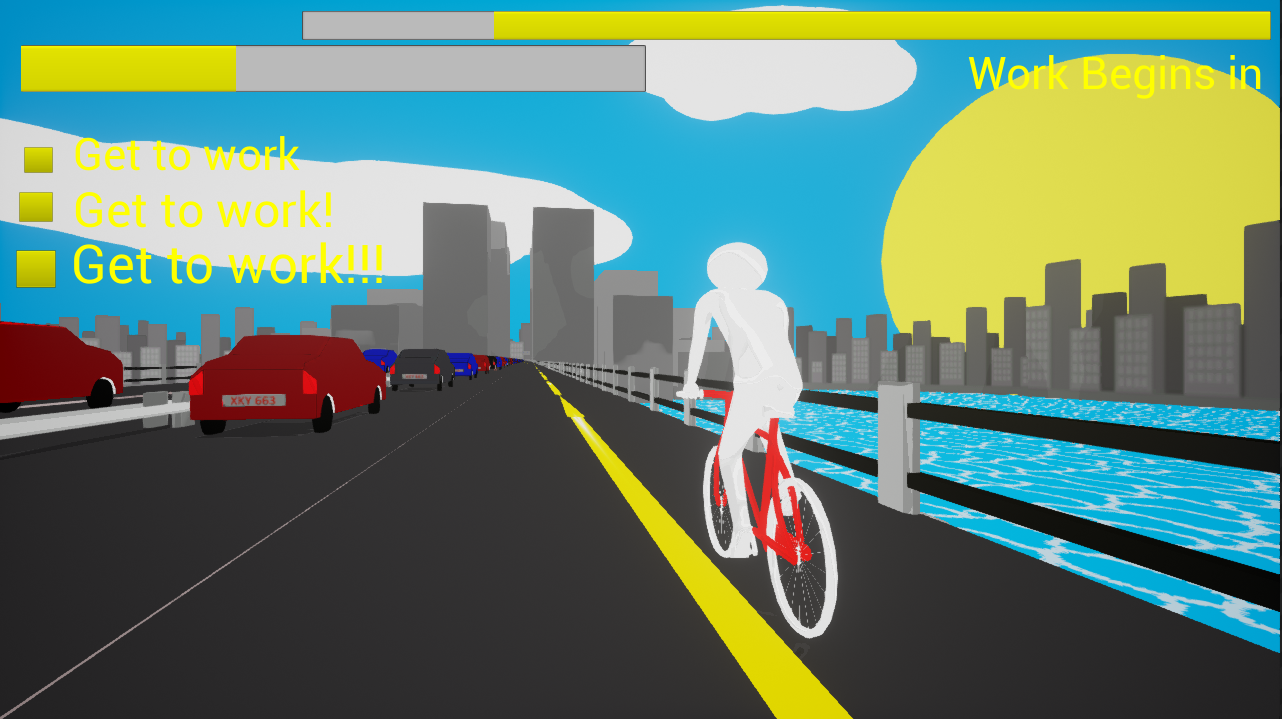 The next scene in the game, is when the character goes in to a café to get another cup of coffee, since he dropped the last one, and there is a lady by the counter. An objective pops up in the right corner that says “Don’t fuck this up”. The lady at the counter asks the main character what he would like to order and then the game presents the character with some telltale-esque dialogue choices with a timer at the bottom of the screen, however, the alternatives doesn’t stop coming, it’s just more and more dialogue alternatives that pop-up and the alternatives turn in to a sort of inner dialogue, that the character has with himself. When there are about ten dialogue choices and the timer are almost at zero, two things will happen. The player will just click a random button, or the player will be overwhelmed and not click at all. The game result is that the game protagonist just stands there confused, rambling about something that he quite does not know of, much like the player. 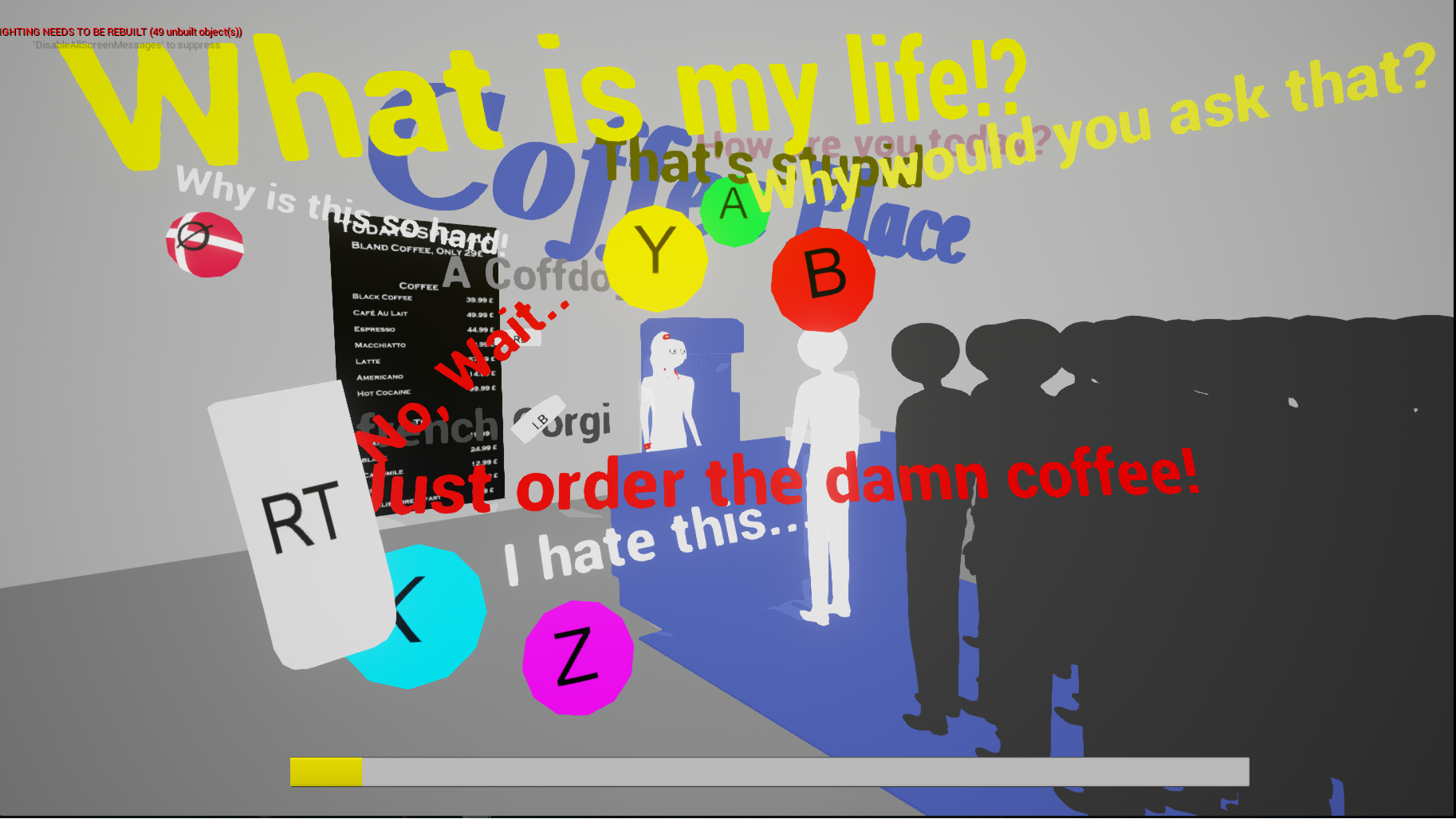 After that scenario, the character eventually gets his coffee and the quite condescending objective states “You totally fucked this up” and the arrow points towards the cafés exit.

As the player progresses through the game he/she will eventually find himself/herself at the protagonist’s workplace. The workplace is designed to be quite repetitive and monotonous. The player is guided to a red chair far in the long narrow hallway (see image 6). When the player arrives, he/she will be guided through and easy, simple repetitive task until the work day is done (a link to a 33 seconds demonstration of that riveting gameplay can be found here https://youtu.be/1M6VEFcGVC8 ).

The point of the workday is for it to be repetitive and not very exciting, that is usually something a game designer should avoid implementing, but it was decided to implement it because the atmosphere of the scene, the static ambience, the far of printer and the beeping fax machine really hones in the feeling of a boring office, and we wanted to make this segment a just a little too long. 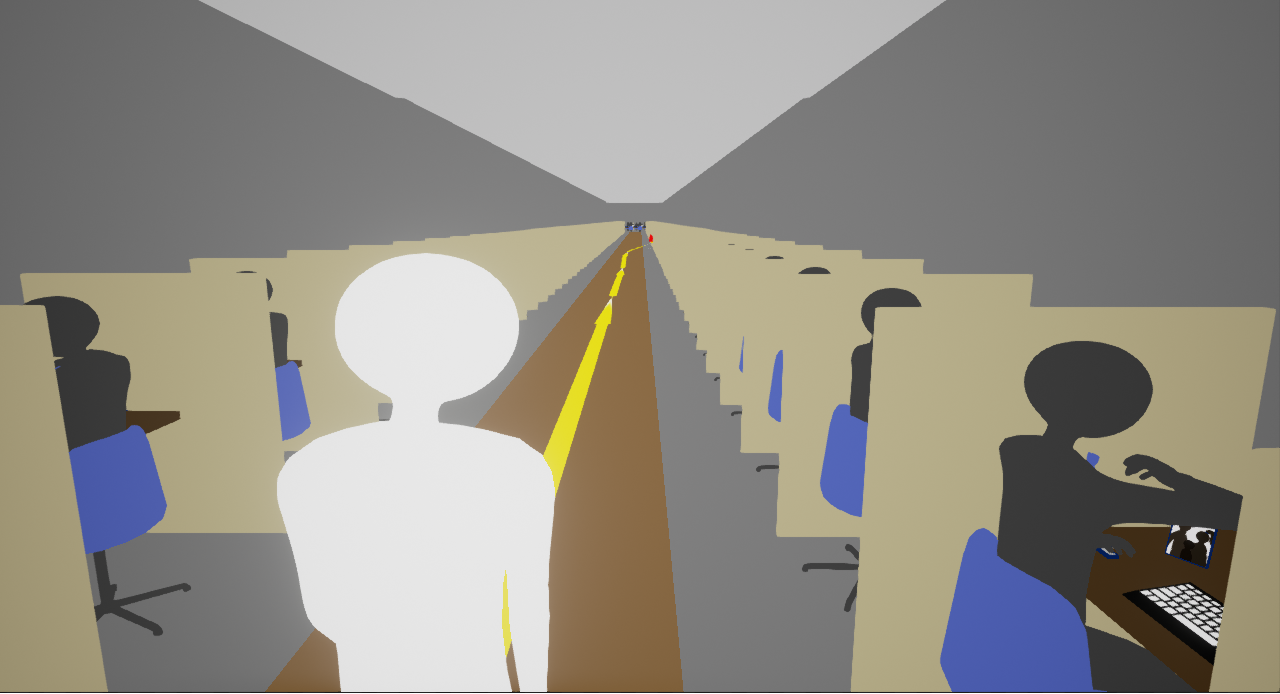 Eventually, as the clock strikes 5PM and the workday draws to a close, the player will find himself/herself outside the building. The arrow will point towards the other side of the screen and the objective says “Go home”. 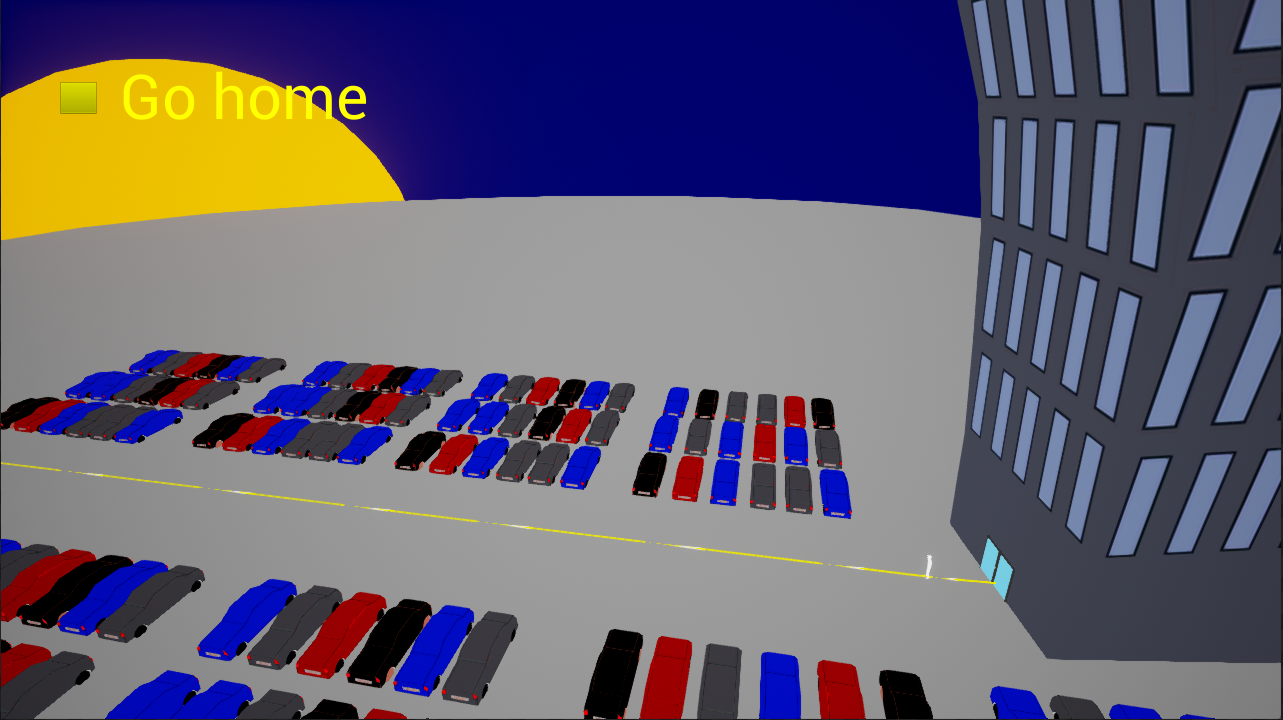 Here the player will get a choice, although the game will not explicitly say so. The player will follow the arrow, since there is no other way to go and the player will go along a road. Along this road, the player can choose to take a turn and deviate from the arrow. However, due to time constraints the turn is not very subtle. 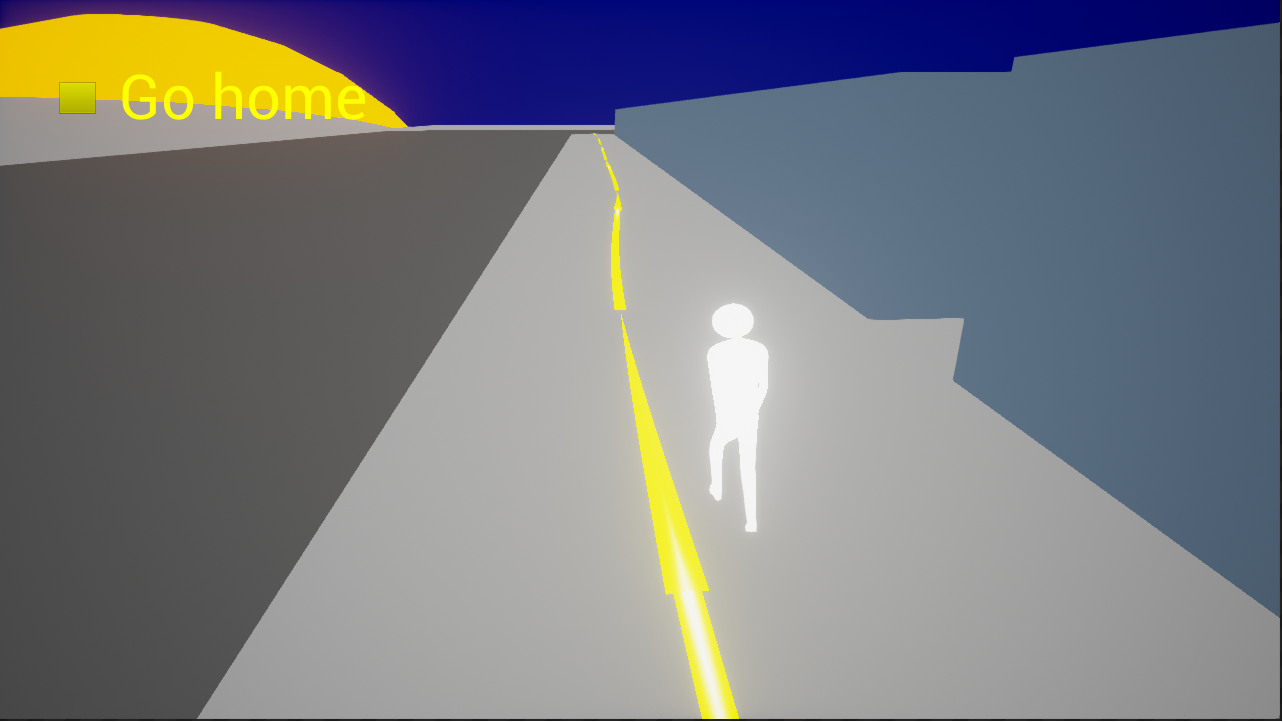 The arrow will still point straight forward and the objective is still to go home. If the player follows the arrow he/she will arrive outside the protagonist’s home, the arrow will point towards the door and when the player interacts with the door, the screen turns black and a sound of a door opening and closing will play, and the player is back to the first screen of the game, and everything starts over. If the player follows the arrow indefinitely the game will just loop forever. Nothing will ever happen.

The point of the game is a very basic attempt to inspire the player to dare to take a chance. Of course we cannot force this out of the player, and so there will be players that do not get it, or miss the ending entirely. Hopefully if this gives the player some sort of insight. The player will hopefully discover something about himself/herself. Does the arrow and objective system makes you feel constrained and limited? Or does it give you a sense of direction and purpose? These are the kind of questions we want to pose to the player. What does the arrow signalize to you? And how does you view on the arrow reflect your view on life?

As you may have noticed, this is a very visual game. Since the game rely a lot on colours to guide the player, especially with the colours yellow and red. I chose this art-direction because 1; It makes it easier to create a lot of assets in a short amount of time. 2, it’s easier to create a more cohesive picture with a simplistic style. And 3, it makes it easier to convey the symbolic message we want to convey, without pages and pages of exposition.

We have also used a cell shading material to give the game a unique identity. It also helps to enhance the colours. For example, at picture 7 you can see a round horizon. It really is a gigantic sphere behind the flat square that the player walks on. But since the colours blend perfectly it looks like a horizon of asphalt. This has really made easier to prototype levels and create backdrops. It also gives a sort of surreal vibe to the game.

The game is made in Unreal Engine 4 and the game is divided into thirteen levels (if you include the title screen). We decided to make the game like this because it would reduce the code clutter and reduce potential lag and frame rate drops. The backside of this is that is happens to take some time for the level to load (and the game does not feature loading screens). This could greatly reduce the pacing of the game. Especially if the music would have overlapped between levels. How did we manage to solve this? We didn’t. But we managed to avoid it by bridging the scenes in sequencer. When the character goes to his car for example. We immediately load the next level and play the cut scene. So it still occurs a lag spike. But it does not affect the pacing of the game.

A lot of the game are basic shapes, almost all of the level design are basic shapes directly from unreal. Since we are using fixed camera angles and the cell shading post-process effect, we can get away with otherwise almost criminal level-design. For example:

This is how the kitchen look in-game with the post-process material on: 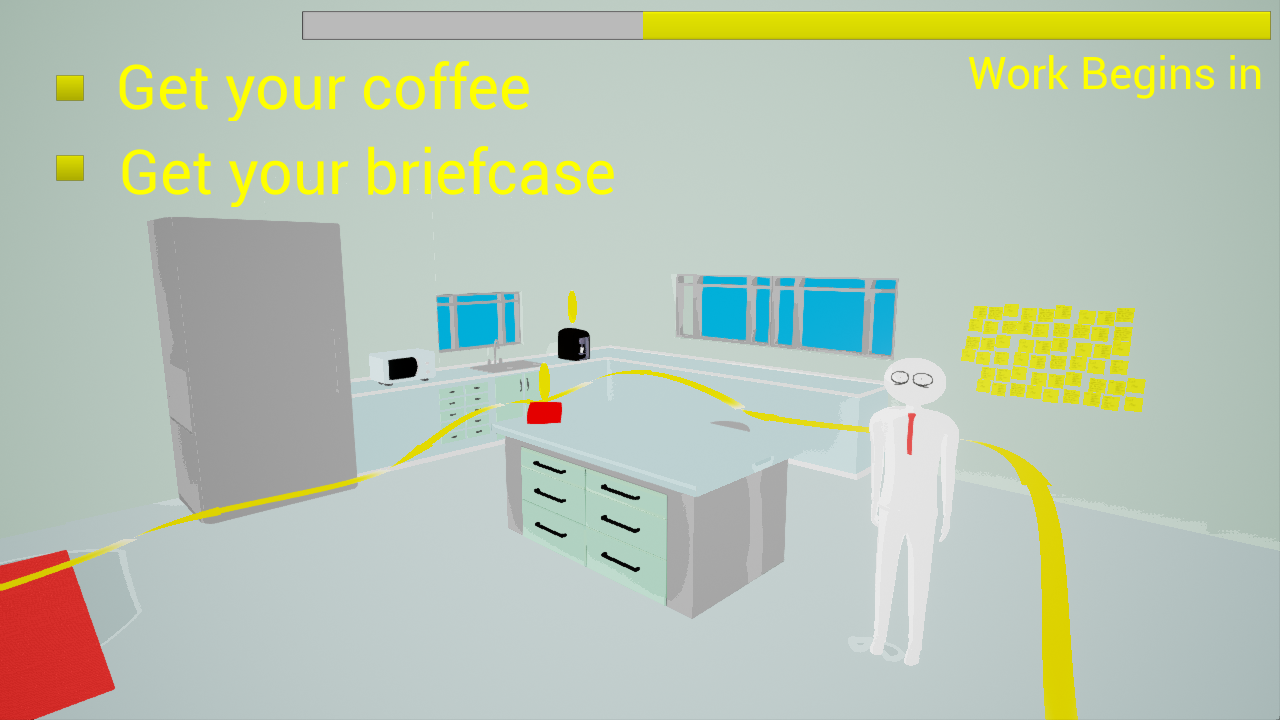 This is how the kitchen looks in the editor, with the post-process material off: 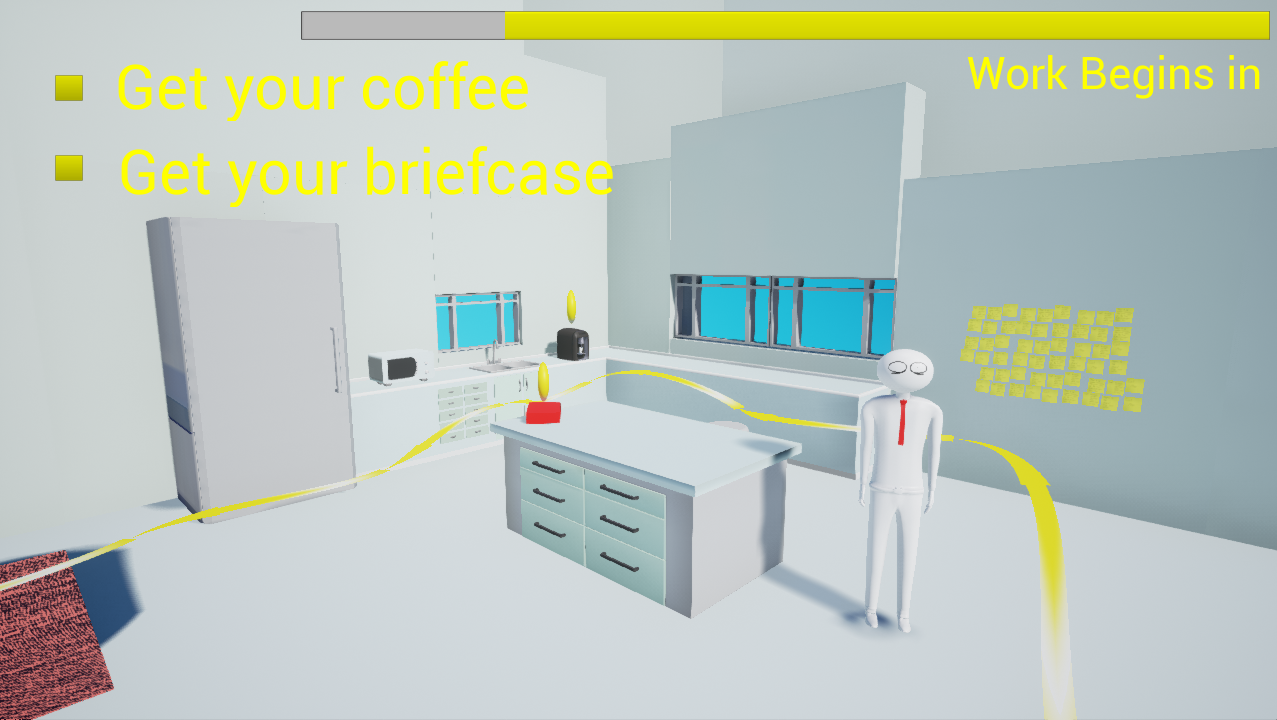 Of course, it wouldn’t look like that if we didn’t use the cell shading. But we did, and prototyping had to go in a hurry. So I just threw in a few basic blocks to have a foundation, then I piloted the camera which the player would look through, and adjusted the small details from that perspective.

The fixed camera angles really helped with the level design. Although it gave some quirks to the actual gameplay. For example, aligning the movement axis to the specific camera. What I did to solve this was to assign every camera a specific value in an array, and every time a camera switch happened it also set a certain value. Basically, it became this neat little solution.

Another neat little trick we’ve used is the office scene (see image 6). What you’re doing in that scene is going very slow through a corridor and eventually you get to your seat. The Y-button pops up and if the player presses it, the player will now sit at the desk of that table and will be ready to work.  What I did there was to have the skeletal mesh of the character already in place from the start of the level, I just made it invisible. But as you initiate the work sequence, I simply made the mesh you are controlling invisible and switched camera. So technically, you are still controlling the character who walks through the corridor, and the inputs that are shown to you (combined that you have collided with the correct hit box) simply triggers the animations in the skeletal mesh that is placed in the camera view.

This game project has been a very insightful experience. It was my first experience as a project manager, and it was also my first time to convey a concept of my own to other people, and try to make them share the vision of the game. It made me search deep down and really hone in on what emotion I wanted to convey, and then how to translate that emotion into mechanics. Since the game was made with a set deadline, the result unfortunately became quite shallow and basic, but I still believe we managed to hit the target. To try to make the player think more about their choices and inspire them to self-reflect.

For more information about the design choices and research behind this project, please check out the bachelor’s thesis: Social Insecurity & Games: Games for self-reflection.